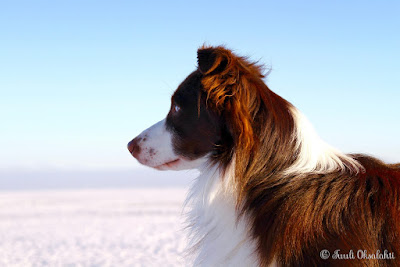 Devi is open towards people and all animals. Devi is crazy in a good way. He wants to work all the time. He has an off switch and is normally sleeping at home, but he needs a lot to do, otherwise he is not an easy dog to have. When he has enough work, he is very nice and obedient. He can be loud (waiting, if there’s training going on nearby, is very difficult), but when he has work to do, he’s quiet. He’s funny and very happy. He's got quite a big ego and he reads other dogs very well, so he doesn’t need to start any fights. He uses his nose a lot, and can forget he has ears sometimes. He doesn’t chase rabbits or other pray. He needs very clear rules, but he’s not a ”hard” dog, he wants to please me. He guards home, yard and the car.

Devi has no problems with different surfaces or with gunshots or fireworks. I don't remember him ever being really scared of anything. If there's a dangerous place, he's careful and watches his step, but isn't scared.

Devi’s hobbies are obedience, rally-obedience, person search, tracking, dog dancing, herding when possible, we try a bit of everything. It doesn’t matter what we do, he loves it. Devi’s best reward is tug of war. He plays with anybody and with any toy. He also loves food.

He had a very sensitive stomach as a puppy and it was a problem until he started to eat raw food. He has no allergies and his stomach has been normal ever since he’s been on raw meat, I can give him kibble as treats etc.